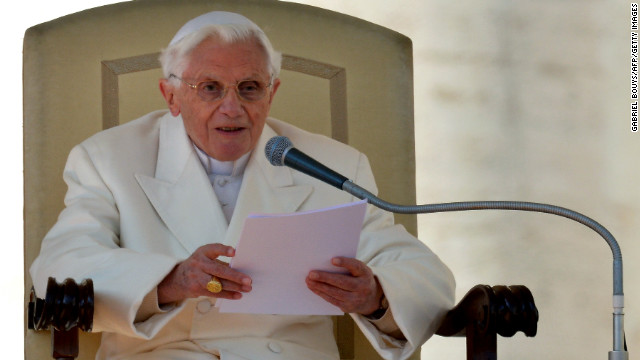 The world is watching. Hopefully, they’re watching, reading and listening to reputable sources on what the pope said at his last public address.

Here it is in full. It’s loaded with Benedict’s characteric nuance and gentle sounding references to loaded messages. He’s a maestro.

When, almost eight years ago, on April 19th, [2005], I agreed to take on the Petrine ministry, I held steadfast in this certainty, which has always accompanied me. In that moment, as I have already stated several times, the words that resounded in my heart were: “Lord, what do you ask of me? It a great weight that You place on my shoulders, but, if You ask me, at your word I will throw out the nets, sure that you will guide me” – and the Lord really has guided me. He has been close to me: daily could I feel His presence. [These years] have been a stretch of the Church’s pilgrim way, which has seen moments joy and light, but also difficult moments. I have felt like St. Peter with the Apostles in the boat on the Sea of ??Galilee: the Lord has given us many days of sunshine and gentle breeze, days in which the catch has been abundant; [then] there have been times when the seas were rough and the wind against us, as in the whole history of the Church it has ever been – and the Lord seemed to sleep. Nevertheless, I always knew that the Lord is in the barque, that the barque of the Church is not mine, not ours, but His – and He shall not let her sink. It is He, who steers her: to be sure, he does so also through men of His choosing, for He desired that it be so.This was and is a certainty that nothing can tarnish. It is for this reason, that today my heart is filled with gratitude to God, for never did He leave me or the Church without His consolation, His light, His love.

Emphasis added, of course. To highlight the point otherwise lost on those who just listened to an address of nice words about a beloved church and faith and office of the papacy, etc. No, this was pointed. The ship has pitched and tossed about on stormy seas. But it is not the ship of fools the world and particularly the world’s opinion shapers believe or want to believe it is. It is ‘the Lord’s barque,’ even when he didn’t seem to be part of the crew. And “he does so also through men of His choosing, for He desired that it be so.This was and is a certainty that nothing can tarnish.” That is key.

No matter how imperfect the ministers, the ministry is set by the one who set it on course and continues to direct it, he was saying.

Do read his entire address. It was longer than usual and filled with gems that deserve consideration. In due time.

But since some big media want to highlight imperfect ministers and paint the church with the broad brush of accusation or condemnation or guilt by implication…or whatever…that needs to be addressed.

On the Wednesday Benedict would deliver his historic, final audience, the New York Times ran a front page, above the fold color photo of a dark Roman night sky over St. Peter’s Basilica, with the featured piece under it being a news analysis by Laurie Goodstein that doesn’t deserve attention. Except that so many irresponsible media do such lazy journalism that consists of reporting what the Times reports, and then others report off of that pack journalism until we’re all with Alice in Wonderland.

At the least, this is media misfeasance. And that’s all the attention I’ll give it, because it’s not worthy of snipping and addressing and analyzing. But it should be exposed as the irresponsible, tendentious, undisiplined press that it is. Report what is true, when you can source it and it is reliable and not coincidentally timed to an opportunity to sway opinion before the college of cardinals commences their process to elect a new pope.

I’ve been in big media long enough to know they can selective choose which sources to seek out, and which quotes make it into print.

Which heaps more attention onto the great service some bloggers are providing as new media giving news consumers alternatives to the old gatekeepers.

Like Patheos, where the insightful, cutting edge blogging on the Catholic Church is overseen by The Anchoress.

Tonight, no lightning strikes; mere hours away from the of Benedict’s pontificate, a bright beam shines from the heavens and the absence of gloom almost gives a shiver: a light shines in the darkness, a light ever-ancient, ever-new.