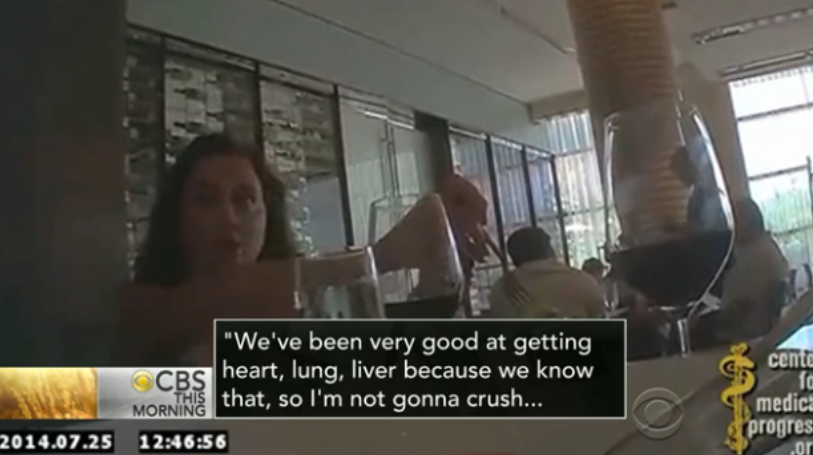 When we think of evil, we think of something violent or demonic, something filled with hatred and wretchedly hungry to devour the good.

But what if evil eats a salad at lunch and is polite, speaking rationally with nice table manners?

I’ve just seen a video where evil casually spears lettuce on a fork and calmly, scientifically, discusses the market for the body parts of aborted fetuses, while sipping a glass of wine.

This absolutely horrific video was recorded last year by investigators from the Center for Medical Progress, a California-based group that is opposed to abortion.

They allege that federally subsidized Planned Parenthood, the nation’s largest abortion provider and abortion rights advocate, is illegally selling body parts in violation of the law. The group said it plans to release other video in coming days.

They have. There are now four available for viewing, all over the internet. Like here.

John Kass characteristically spoke from the heart, and said what so many Americans have said, on every social media platform they have, after these videos started coming out.

What’s chilling is the absolute calmness in her voice.

I’m certain Dr. Nucatola — enjoying a nice lunch of salad and red wine and discussing organ harvests of the unborn — doesn’t consider herself to be evil. Perhaps you don’t either.

But I do. I have no other way to see it…

You’re free to go online and see for yourself. You might see things differently. But the way I see it, the way I hear it, is that this is the way evil works best, not as a growling beast crouching in the darkness, but in a rational, scientific voice. It is the way it’s always worked, the way it worked years ago, the way it works now…

Conservatives are publicly angry, but liberals haven’t handled this well at all. Some have argued for a more strident defense of Planned Parenthood’s organ policy. It’s obvious that they’d like a good dose of righteous moral indignation. But how do you invoke morality to defend this?

The left has recently celebrated Roman Catholic Pope Francis, who shares their position on global warming. They’ve used the pope as a cudgel in political debate, to mock those who think “climate change” is little more than a slogan for big government and redistribution of wealth.

So here’s my suggestion: Why doesn’t the left call the Vatican and ask Pope Francis to weigh in on this one? Ask him when life begins, and if there’s any morality in harvesting the organs of fetuses for research.

One evolving argument of Planned Parenthood, parroted by their media and political advocates, is that if no profit is made, then it is legal to sell the parts for research, since payment goes to defray expenses in transportation of the fetal organs and other costs.

But who cares if it’s legal? I don’t care if it’s legal. Slavery was legal once too, and not just in America, but just about every other country in the world. The powerful have always legalized their subjugation of the less powerful. And in our the modern world, there is nothing less powerful than life in the womb.