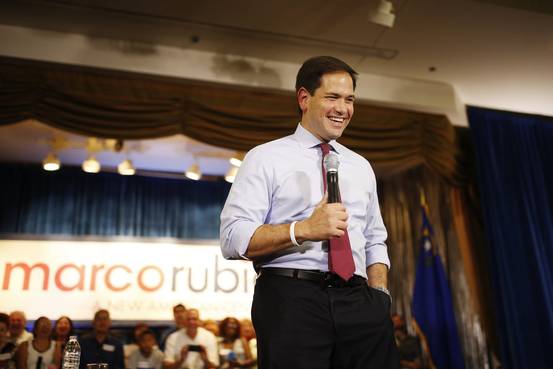 If it is, he goes out with noble dignity.

Florida Senator Marco Rubio is young and could have a great future ahead of him in leadership, whether at the state or federal level. His candidacy for president took a precipitous turn recently and never recovered from the slide. He came out acknowledging his mistakes in judgment, a rare act of humility for a public servant and a candidate for the presidency, singular among a field who mostly don’t see themselves at all as a public servant, and some of whom seem to betray a sense of entitlement and aspiration to a high and mighty position of power.

When he was on the slide in recent weeks and even the past several days, pundits and analysts said he should get out of the race to save face from losing his home state of Florida, which would set back or negate his chances to run for governor of that state in the future, with a wide open road to future runs for higher office. Even his supporters started expressing that wish, so he wouldn’t stand to lose his own state. But Rubio  learned from listening to others than to his own heart and conscience.

With a couple of poor debate performances causing his slide in the polls, he took the bad advice to counter the verbal assault with low blows and to ‘punch back’, which he almost immediately regretted. As low as it got in an exchange with Donald Trump (a regular and a veteran in the arena of disgraceful assaults), Rubio knew he should never have gone there, and he publicly apologized. He exposed his regret at having humiliated himself, his family, his supporters, American voters and everyone involved in the process. It has been a rare public accounting for one’s errors of personal judgment, an examination of conscience that allowed him to express remorse and the will to serve as a public witness to higher goals.

It’s rare in a public official, a leader, especially one who seeks to be the top leader in the land. And before he exists the race, if he does after Tuesday’s elections, he deserves recognition and appreciation for this honesty and noble dignity.

On the eve of the Florida primary, a reflective Marco Rubio looked out at a roaring crowd of diverse supporters and, once again, expressed regret.

“The fact that I’m here now in front of those cameras comes with responsibility, and I’ll confess, I’ve learned that myself,” the Florida senator said…

He ran through the list of people he embarrassed with his bawdy rumble with Donald Trump — his children, his wife, his young supporters.

“I felt terrible about it,” Rubio said. “I realized that win or lose, there are people out there that see what I’m doing and follow it as a role model.”

After days of unflinching optimism on the campaign trail, the gravity of Tuesday’s Florida primary appeared to bear down at one of Rubio’s last stops of the day. And potentially, one of the last stops of his presidential campaign…

He lamented Trump’s over-the-top style, from his use of profanity — “we have never had a presidential candidate that has to be bleeped out” — to his apparent willingness to pay the legal fees for a supporter who sucker punched a protester.

There’s a significant lesson in that. A great sign of maturity as a citizen, and a candidate for high office.

Later Monday, Rubio’s bus pulled up to a crowd of hundreds gathered on a brightly lit, outdoor basketball court in West Miami, where Rubio would hold his potentially last rally as a presidential candidate. He hopped up on the bed of a pick-up truck and used a bullhorn to address the enthusiastic crowd, as a giant American flag hung on a building behind him.

It was a homecoming of sorts, given that Rubio said he used to play basketball in this park and it’s an area where he campaigned to run for city commissioner two decades ago.

“And this is the park I wanted to be in tonight, on the eve of the most important election in a generation, in the state that always makes the difference…

Speaking more in Spanish than in English, Rubio thanked the community for their support over the years. He had fun joking around with the crowd — especially in Spanish — and appeared more relaxed and at ease than he has in days.

A while back, in the thick of the debate season and beginning of the caucuses and earliest primaries, someone asked him what his reaction would be to losing. Without a pause, he instinctively responded that God’s will would be done, and that’s all that mattered. On this eve of what may be the ultimate Super Tuesday of this election year, Rubio seemed more at peace than he has in many months.

One thought on “Rubio’s last stand?”