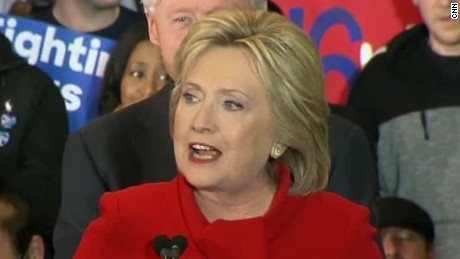 That headline very late on the night of the Iowa Caucuses, before a few final counts came in, declared a big and early setback for Hillary’s aspirations for the presidency yet again. In 2008, she and her campaign were shocked by a third place finish in that first of many primaries.

“I think Hillary Clinton is going to eke this out in the end,” said a longtime Democratic campaign manager, strategist and news commentator.

‘A 74 year old Socialist candidate is giving Hillary Clinton the run of her life’ said the correspondent assigned to the Sanders campaign.

So, once again, this won’t be a ‘waltz to coronation’ in the Democratic Party for Mrs. Clinton, as many political writers have dubbed it for so long now. No, it’s starting off on a bumpy road, that’s headed next to Sanders’ territory in New England.

It’s been evident for some time that Clinton supporters have been having a hard time supporting her, especially as more revelations have emerged. The congressional hearings on what really happened in Benghazi further damaged her credibility as a member of government.

By the evening hours of September 11, 2012, the Obama administration knew that the deadly assault on the American diplomatic compound in Benghazi, Libya, was a planned terrorist attack, yet for several days afterward top administration officials attributed the attack to a spontaneous protest of an anti-Muslim video. Hillary Clinton, then secretary of state, participated in that cover-up.

Getting away with having a private email server, while serving as Secretary of State, has finally run out of facilitators, and she’s not getting away with what investigators have been able to recover from that server, even after her attempts to destroy evidence.

A new report that Hillary Clinton’s personal server contained information about “special access programs” makes her handling of sensitive material “worse than what Snowden did,” Charles Krauthammer said tonight.  “What people have to understand is that there is nothing higher, more secret than an SAP,” Krauthammer said on Tuesday’s Special Report. “From some people I have talked to, this is worse than what Snowden did because he didn’t have access to SAP.” “The reason it’s [so sensitive] is if it’s compromised, people die,” he said. “It also means that operations that have been embedded for years and years get destroyed and cannot be reconstituted. This is very serious.”

The New York Times reported it with the gravity it deserves.

That the Times turned around and endorsed Clinton for president was not surprising, but not that convincing.

The Clinton campaign’s relationship with the Times has been troubled at times over the past year following the revelations that she maintained a private email server while leading the State Department.

Which, the Times noted most recently, had emails not only heavily redacted before they were turned over to federal authorities for investigation, but 22 of them “withheld entirely” because they contained top secret information.

Hillary Clinton has been losing support from her own base for a long while, and these problems only exacerbated that core weakness of her candidacy as the Democratic Party nominee for the presidency in 2016. The first cracks in that foundation came in 2008. The New York Times explains best, in this revealing piece, out just ahead of the Iowa Caucuses, about the women who should be Clinton’s most staunchly ardent supporters.

“Polls don’t quantify doubts, but anecdotally, enthusiasm for her is anemic. Ambivalence is seeping in about her authenticity and the power of her symbolism as a woman. Once again, she has been caught coasting on inevitability by a grass-roots idealist with a universal health care plan. And there’s a sense that those 18 million cracks in the glass ceiling, from 2008, were historic enough.”…

“A lot of women vote from a compassionate, nurturing place, and those are not qualities you feel from her.”

On her authenticity and her symbolic power as a woman, there is much to say. Especially as it relates to “women who vote from a compassionate, nurturing place”. More on that next time.