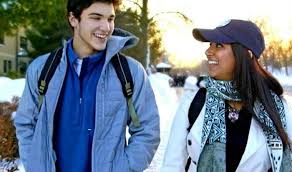 Who knew the ability to form a relationship was nearly a lost art?

“Over half of America is single, for the first time.”

The screen shot with that startling fact opens a unique documentary about to come out in theaters in the U.S. on April 17.

“It’s kind of old fashioned to go on a date,” says a voice over camera shots of young adults hanging out together and yet somehow disengaged. “No one seems to know how to talk to each other anymore. They’re too wound up in social media.”

Then the professor’s voice says “Dating here has a sort of of broad, uncertain, ambiguous definition.”

Welcome to ‘The Dating Project‘, a film about life in America for young people hiding their insecurities and longings, emotions and hopes tangled up with ambitions and the need to succeed professionally, at a still tender age when they need direction and formation.

It was inspired by Boston College Professor Kerry Cronin, who discovered that college students were enmeshed in the hookup culture, unhappy but unaware of any way out of it to form relationships with peers they might find interesting. If only they could find them, and be found.

“And that’s when I realized that dating was a social script that’s no longer being supported by our culture”, said Cronin.

Though she teaches in the Philosophy Department, Prof. Cronin became known as ‘the dating professor’ when she added an elective course on the basics of forming relationships from the most elementary first steps.

She asked students immersed in the hookup culture to work on dating. “By the end of the semester, they hadn’t been able to”, she says about the project, the revolutionary work of teaching young adults how to do what used to come naturally to generations up until their parents’, but foreign to them.

“They had no idea what a date was,” Cronin says. “How you would ask, what to talk about on a date. They were not only stressed about who it would be and the possibility of being rejected, but the whole model of it was gone.

I’m not trying to go back to the Fifties. Look, it’s a script that works like manners work. Dating allows you to know what you’re doing, and what to expect. The hookup culture promises you that this is going to be an easy, casual thing without having to put in a lot of commitment, time, energy, drama.

So I ask them if it’s that they’re willing to take off some or all of their clothes, make out with someone or more, and that’s more casual than going for a cup of coffee?! And they say ‘yeah, that doesn’t make any sense’. They know that, they want the way out, but nobody’s really offering it to them.

When Kerry Cronin did, she made it simple and compelling, charming and challenging, and the students found it tough to tackle.

What’s really true about this assignment, I think, is that it’s not about falling in love. It’s about stepping outside the dominant social script of the hookup culture on college campuses.

The assignment is, in the next two weeks you have to go out on a date. The person needs to know it’s a date, you have to ask them in person, none of this (she mimics texting on a device), and it should be a first level date. That means it should not cost more than $10. It should be no longer than 90 minutes. If the date is going well, I recommend getting out after 60 minutes. Because if you have a really good date after 60 minutes, chances are good that the person will want to go out with you again.

It’s simple, and systematic. Have a plan, don’t put the other person in a position of having to answer “What do you want to do?” Have a few questions ready to start a conversation. Those are among the basics, and they don’t come naturally to young people today, who go to parties to wind up with someone, young people who get invited to events through social media instead of through a phone call, or the least likely of all, in person.

‘Level two’ dating implies exclusivity, ‘level three’ is relationship work, and watching it all being taught to self-conscious, perplexed, uncertain, nervous college students in a large group setting with searching faces riveted by Cronin’s teaching style is a lesson in the humanities intersecting with social science in 2018.

Cronin’s annual student dating talk draws an attendance of about 1100 students. “You’re here because you’re a mess, and you know it,” she says with a sharp wit, wisdom, authority and authentic care for helping students build up a culture of relationships.

There are a lot of different types of hookups, so you do that and you feel you belong. The biggest buzz kill in the room is the one asking ‘what do you think this means?’ You have to leave your emotions at the door. But you never really leave them at the door. What I’m asking you to do is give dating a try. Because this matters.

So she takes the time to teach, in depth, the nuances and simple facts of the ‘how to’s’, in an engaging, straightforward style.

You can date someone you’re not physically attracted to but you can become attracted to them when you find out who they really are.

What really matters is ‘does someone have real goodness? Do they have the ability to make a promise and keep it? Does the person have the capacity to put the other person before themselves?’

I asked Professor Cronin if she knew how revolutionary this is, this project of teaching what we all used to know but young people never learned. She laughed, saying she never intended it to be that, but saw that something had to be done for these college students.

Late in the film, she says this:

The message behind all of this is that ‘relationships and sex and all of it is no big deal’. But the problem is, it’s a big deal. We’re then sort of surprised why our loneliness hurts so much. Why the emptiness we feel after we engage in all this stuff actually hits us. But I know that these young people, at that age, are looking for someone to ratify them. ‘You get a glimpse of your self worth when you’re home, or with friends you’re comfortable with, but not from the outside world.’

In a montage of clips with the main subjects of the documentary, early in the project, a young woman says “I’m kind of grateful the professor is doing this.” A young man says “It’s unexplored territory.”

That strikes the viewer as much as any other revelation in this compelling mini-doc. The film debuts April 17th. It should be seen in high schools, colleges and theaters across the country.