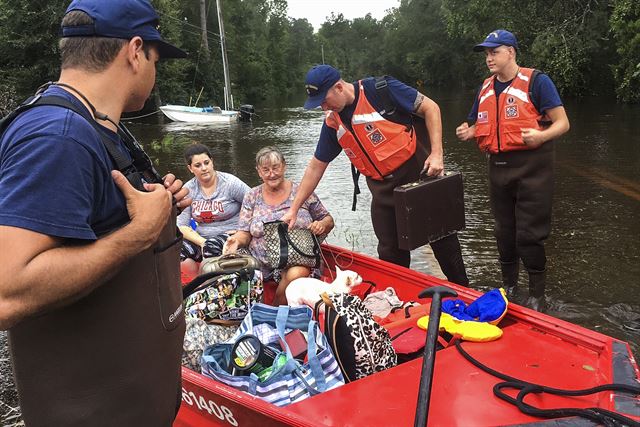 We’re still learning the extent of the damage Hurricane Irma did to the homes, neighborhoods, communities and fundamentally the people of the state of Florida from the Keys to Jacksonville in the north, with access to some areas cut off for days, and therefore, delivery routes of relief. Irma devastated Barbuda.

The Category 5 storm with sustained winds of 175 mph (281 kph) will smash into the Virgin Islands Tuesday night. It has already obliterated parts of Dominica and killed at least one person in Guadeloupe.

Puerto Rico will get hit hard Wednesday morning, the National Hurricane Center said, and the storm could be catastrophic…

Puerto Rico sheltered many of the evacuees who fled from other Caribbean Islands during Hurricane Irma earlier this month. Now those evacuees and native Puerto Ricans are bracing for devastation.

“This is an event that will be damaging to the infrastructure, that will be catastrophic,” (Puerto Rico Gov. Ricardo) Rosselló said. “Our only focus right now should be to make sure we save lives.”

That has been the focus for weeks now of people across the United States. When Hurricane Harvey was still beating down on Houston, whatever had been dividing Americans politically or culturally dissolved or got sidelined by the force of nature and the ‘force more powerful‘ than destruction, love and charity impulsively and instinctively passing from person to person.

Numbers of people beyond counting have been showing up in this ‘army of compassion’ descending on sites of destruction even while they’re still being battered. Especially then, which shows the real magnanimity of regular Americans. Houston’s ‘Mattress Mack‘ is emblematic of this spirit of unity and generosity, and the humility that, to a person, seems to define the motivating impulse driving people from their comfort zones to the place they’d rather be in an emergency: with the people under siege. They have offered what they have to those who need anything.

Magdalena Marez, 27, and her fiancé Zachary Gasser, moved into their apartment a few months ago. They went furniture shopping at a handful of Houston-area stores, but they’d never stepped foot into a Gallery Furniture store until early Tuesday morning. They wandered in, soaking wet, just after evacuating from their apartment.

Floodwaters were ankle deep, and they struggled to make the drive.

When they arrived at the showroom volunteers handed them dry clothes, toothbrushes, soap, shoes — and a mattress still covered in plastic. Marez is moved by McIngvale’s generosity.

“We never stepped foot in (one of his stores) and now I’m just like, wow, I mean, they opened up the doors. Like nothing. He didn’t even second guess it,” she says. “He was just like, ‘Let me help you.'”

McIngvale is also paying for portable showers so evacuees can have their first hot shower in days.

Marchione, the employee, says his boss has opened the store to evacuees and is providing meals because it’s his way of giving back to a community that has brought him success over the past 36 years.

“This is Houston,” Marchione adds. “That’s how Houston rolls.”

Jim McIngvale was my guest on radio, because he answered my call with the generosity he shows to all calls on his time and attention. Media had descended on ‘Mattress Mack’, he agreed to brief exchanges with them while working, mainly to put the word out that all help for evacuees was needed and welcomed. He told me that a reporter for some big media outlet asked why he was doing all this work in his big company store, housing and feeding so many people. He said “because I have to”, but the reporter replied “no you don’t”. He quickly corrected “yes I do”. It’s what he knows, it’s what he lives.

His Gallery Furniture business is still helping, in the cleanup phase and beyond.

The Miami Herald editors published a fervent wish for such charitable goodwill for Floridians before Irma hit: “Be kind, send help, rebuild“.

Nerves are frayed, to say the very least. But South Floridians have always risen to the occasion during difficult times, extending a generous helping hand, with no hesitation, with no expectations of reciprocation.

It is one of the Editorial Board’s most fervent wishes — but only one — that in the pre-disaster hunt for plywood, water, gas, and hotel rooms, we remain civil, empathetic. Remember Connect Miami? April’s successful community-wide initiative to encourage residents to engage with people unlike them? To hear their stories? To find commonality? Irma will be put this initiative on steroids.

People from everywhere have been quick to step up, show up and reach out, not even knowing they’re part of a national rapid response team. They didn’t ask what identity group the afflicted belonged to, nor what political party,nor how they voted in the last election. The only questions they asked and are asking are ‘What do you need?‘ and ‘How can I help?‘

I’ve had several guests on radio these past two weeks somehow involved in disaster relief and recovery, charitable organizations and government aid, professionals, spiritual directors, people trying to help people and connect with the best ways to get things done.

Some of them said something I’ve been thinking, hoping, saying on my show, that we should be able to keep this going. See ‘the other’ as a person to engage, to serve, to share a vulnerable moment with and find ways that encounter can benefit both. And build or rebuild the nation that’s made up of people, known to be fiercely independent, but who are remembering how interdependent we truly are.