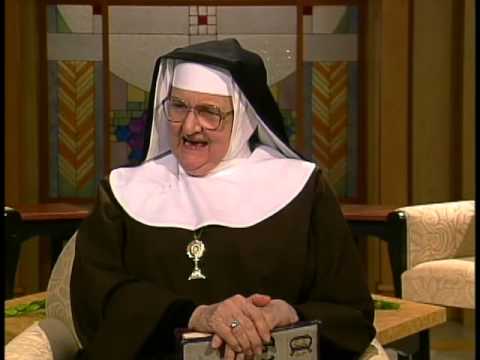 She has a way.

Using the present tense for the nun who has passed into eternal life seems only fitting. Because she’s present on decades of air waves that continue to broadcast her shows in daily programming on the television and radio network she founded, she’s in booklets she wrote, long scattered across the world and now in the hands of people ‘in the desert, on mountains, in valleys’, as she once described her desire to reach people, ‘ to give courage, hope, strength’. And her voice is always resonating with the simple message at the center of everything she taught and said before rendered silent by debilitating strokes, and afterward in the witness of her constant suffering: ‘Jesus. Loves. You.’

Mother Angelica founded a monastery in the deep South decades ago out of great concern and reparation for the injustices carried out there through slavery, then segregation, discrimination and racial inequality, all of which she followed intently from her home in Ohio. It was the fulfillment of a promise to God for healing of an impairment, and both happened. From its very small and humble beginnings, the place was destined for big things, because the nun who ran it was a force of nature who wouldn’t be stopped from telling people in the world ‘Jesus. Loves. You.’ When network television aired a religiously themed program that corrupted the truth of the gospel, Mother Angelica decided to start her own. Construction workers building a garage for the nuns were tasked with turning it into a makeshift studio, get and set up some cameras and broadcast equipment, and beam a signal to carry the Eternal Word Television Network to whomever it would reach.

It reached me many years later, as I’ve shared here. As a woman broadcaster, I’m thankful to have watched and listened to her for so many years, seeing a woman of faith and conviction go live on the air with the ease of talking with the person in front of her about life and it’s ups and downs, faith fully authentic and alive and shared with what she never thought was courage because it came so naturally and from a deep place in her heart. She was truly Mother.

She talked about Jesus all the time, but in compelling and endlessly varied ways. The New York Times noted that Philadelphia Archbishop Charles Chaput said “she succeeded at a task the nation’s bishops themselves couldn’t achieve.” It cited a Time Magazine profile calling her “arguably the most influential Roman Catholic woman in America.” Fr. Mitch Pacwa, one of the longest running hosts of programming on EWTN and the one who took over Mother’s show when a debilitating stroke finally ended her ability to speak, called her A Strong Woman in Love with Jesus.

The network has long aired the classic Archbishop Fulton J. Sheen series Life is Worth Living, as relevant now as ever. Bishop Robert Barron, whom many consider to be the ‘modern day Fulton Sheen’, founder of Word On Fire ministry and the host of the magnificent Catholicism series, simply and eloquently said this:

Against all odds and expectations, she created an evangelical vehicle without equal in the history of the Catholic Church. Starting from, quite literally, a garage in Alabama, EWTN now reaches 230 million homes in over 140 countries around the world. With the possible exception of John Paul II himself, she was the most watched and most effective Catholic evangelizer of the last fifty years.

But he acknowledged as well her scruffy ways, for which she was well known.

Mother Angelica wasn’t perfect—and she would be the first to admit it. Due to her lack of polish and advanced theological education, she sometimes said things that were insufficiently nuanced and balanced. And her hot temper, which gave fire to her evangelization, also at times led her to indulge in ad hominem attacks and unfair characterizations of her opponents’ positions. But these are quibbles.

her instinct for the supernatural dimension of Christianity. Now I realize that such an instinct might seem rather obvious, but in the immediately post-conciliar years there was indeed a tendency to naturalize the supernatural, to reduce Christianity to the works of social justice and the cultivation of psychological well-being. Mother knew that a de-supernaturalized Christianity would in short order lose its soul and, paradoxically, its relevance to the world.

Tributes and memorials will continue to pour in from around the world, as Mother Angelica reached into the living rooms, on the dials and online in homes in the farthest flung places on the global Catholic network in many languages. She is laid to rest at the monastery she founded, this Friday. But she remains, with her way of challenging and encouraging modern culture to recognize the truth of human dignity, and the ever present love of God. Because she found a way to grow the EWTN media empire in the news world and geographical world, her voice will remain as long as signals will be broadcast, to do what Pope Francis so often encourages, to go out to the existential peripheries and create a culture of encounter.

President Obama’s mandate requiring free access to contraception with virtually no employer exemption is at core a consitutional threat to religious liberty, not a heated debate about contraception and Church teaching. However, it quickly turned into that.

So now that we’re on the subject…

Advocates of President Obama’s contraception mandate should admit that its main purpose is sexual liberation and not “women’s health,” according to a feminist author who supports the mandate.

“The phrase ‘women’s health’ in the birth control dispute is the latest nimble euphemism,” author and blogger Pamela Haag wrote in a Feb. 17 essay published on the “Marriage 3.0” blog.

Access to contraception, she said, “isn’t really about my ‘health.’ It’s not principally about the management of ovarian cysts or the regulation of periods.”

“Birth control isn’t about my health unless by ‘health’ you mean, my capacity to get it on, to have a happy, joyous sex life that involves an actual male partner,” wrote Haag, criticizing White House supporters for discussing contraceptives mainly as “preventive services” for women’s health.

“The point of birth control is to have sex that’s recreational and non-procreative,” wrote Haag approvingly. “It’s to permit women to exercise their desires without the ‘sword of Damocles’ of unwanted pregnancy hanging gloomily over their heads.”

And now that women are speaking out…

In recent posts on CNA’s Catholic Womanhood page, columnists attacked the mandate from various angles – some addressed the issue of religious freedom while others questioned the validity of abortifacients, sterilization and contraception being labeled as “basic medical care” for women.

The articles come amid a storm of protest over the administration’s Jan. 20 announcement that religious institutions will have to cover these services in employer-provided health insurances plans.

Now, before anyone gets too hot and bothered over the topic du jour of contraception and whether or not the government (ahem, the taxpayers, aka you and I) should pony up the cash to make it free for all, let’s take a moment to examine the science behind that wonder pill that has freed women from the tyranny of childbearing and the slavery of motherhood … and ask ourselves frankly, “has it all been worth it?”

I’ve seen more passion on Facebook in the past 3 weeks over bedroom matters than can be contained in the entire Twilight series … and then some.

It would seem that the argument, rather than being framed as a matter of religious freedom, (Should the Catholic Church be forced to violate her own beliefs and recount her stance on a major moral issue at the behest of a civil government?) has become something more of an entitlement issue (Do American women have the right to demand, from their fellow citizens, a subsidized supply of contraceptive drugs or devices in order to manage their sex lives?)

So it’s a lively debate, to put it mildly. Women are engaged.

Including this powerful nun named Mother Angelica. Whose concern is at least as much about constitutionally protected religious liberty as anything.