Some audacious claims have been made in Washington lately on behalf of women. They clearly speak for Planned Parenthood and women in league with their cause. Where are all the women for whom they do not speak?

Like countless other women, we’ve been closely following the Obama administration’s attempt to compel religious institutions to provide contraceptive coverage in violation of their beliefs. And like countless other women, over the past several days we’ve heard House Minority Leader Nancy Pelosi and others repeatedly ask those who oppose the contraceptive mandate, “Where are the women?”

Equal rights. Now pay equal attention to these voices. Because word spread like wildfire that they were being represented in a public statement.

We listened to prominent women purport to speak for us. We watched them duck the fundamental religious-liberty issues at stake. And we saw them assume that all women view cheaper contraceptives and abortion-causing drugs as unqualified goods.

In response, we circulated an open letter to a few dozen of our female friends in support of the competing voice offered by Catholic institutions on matters of sex, marriage, and family life. The letter spread, and in 72 hours we received some 750 signatures from a diverse group of women across the country, including women serving overseas. Signatures are still flooding in. Doctors, nurses, lawyers, teachers, mothers, business owners, community volunteers, scholars — women from all walks of life are proud to stand together with the Catholic Church and its invaluable witness.

I am one. My signature went on the statement in the early going, but they were so inundated with responses they could only work so fast, and decided to post it now and add on daily.

Most of us are Catholic, but some are not. We are Democrats, Republicans, and independents. Many work or have worked for a Catholic institution. We are proud to have been associated not only with the work that Catholic institutions perform in the community — particularly for the most vulnerable — but also with the shared sense of purpose found among colleagues who chose their job because, in a religious institution, a job is also a vocation.

To a woman, we are deeply troubled by the mandate’s violation of fundamental religious-liberty protections…

Those who invoke “women’s health” against those of us who disagree with forcing religious institutions or individuals to violate deeply held beliefs are more than a little mistaken — and more than a little dishonest. Even setting aside their simplistic equation of “costless” birth control with “equality” and “women’s health,” note that they have never responded to the large body of scholarly research indicating that many forms of contraception have serious side effects; or that some contraceptives destroy embryos; or that government contraceptive programs inevitably change the sex, dating, and marriage markets in ways that lead to more empty sex, more non-marital births, and more abortions. It is women who suffer disproportionately when these things happen.

No one speaks for all women on these issues. Those who purport to do so are simply attempting to deflect attention from the serious religious-liberty issues at stake. We are proud to stand with the Catholic Church and its rich, life-affirming teachings on sex, marriage, and family life. We call on President Obama, Health and Human Services Secretary Kathleen Sebelius, and our representatives in Congress to respect religious voices, to respect religious liberty, and to allow religious institutions and individuals to continue to provide witness to their faiths in all their fullness.

Women speak for themselves. And many, many more are speaking up in league with them by the hour. 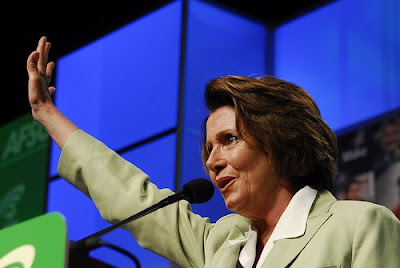 This headline caught my attention: “Pelosi rips ‘No Taxpayer Funding for Abortion Act.‘”

On a conference call with reporters and bloggers this afternoon, Rep. Nancy Pelosi (D-CA) characterized the GOP’s recent legislative effort to restrict access to abortion and contraception as “the most comprehensive and radical assault on women’s health in our life time,” promising to wage a campaign against the effort.

Go through that sentence slowly.

“[House Speaker Nancy] Pelosi reportedly told liberal bloggers Monday that “nobody wants to vote for the Senate bill,” and so she’s strongly considering the non-vote vote.”

Senate Democratic leaders had already drawn jeers from Republicans for a plan to try to pass a follow-up health bill with only 51 votes, as opposed to 60. Now Pelosi and Rep. Louise Slaughter, D-N.Y., chairwoman of the House Rules Committee, are cooking up a plan to pass the original health bill from the Senate side without forcing rank-and-file Democrats to technically go on record in support of it.

What they’re brewing is unprecedented on this depth and breadth.

Here’s how the maneuver would work and why Pelosi wants it:

Before Congress can consider the package of changes that many lawmakers want in exchange for their support on the original bill, the House has to first pass the original bill from the Senate side.

Problem is, even with assurances that the package of changes will be considered, many House Democrats don’t want to go on record in support of the Senate bill — what with its sweetheart deals, tax on high-value insurance plans and other controversial provisions.

Enter the Pelosi tactic, known as a “self-executing rule.”

Under this tactic, the House could simultaneously approve the Senate version of the bill while voting on the package of changes. This would “deem” the Senate bill passed, though not directly show members voting in favor of passage.

How convenient. Just say it is so, and…it’s so.

If you didn’t watch the televised health care summitÂ live last Thursday, chances are you saw precious little coverage in the news media afterward. Especially of odd outbursts like Senate Majority Leader Harry Reid angrily denying the Democrats had even considered a ‘reconciliation’ move (when everyone knew they were planning that very thing). And House Speaker Nancy Pelosi testily denying the legislation allows federal funding for abortion…..(when it in fact, does).

So let’s take a look at that latter tiff, because it’s a pivotal issue. Ms. Pelosi was misleading.

â€œI think itâ€™s really important to note, though, and I want the record to show, because two statements were made here that were not factual in relationship to these bills,’ Pelosi claimed.

However, the Senate bill that is the basis of the reconciliation push in Congress contains massive abortion funding and has other pro-abortion problems.

“Speaker Pelosi has her own idiosyncratic dictionary, in which federal agencies can pay for abortion on demand without spending ‘public funds’ or ‘taxpayer funds’ for abortion,” Johnson said. “In ordinary English, however, this is deceptive claptrap.”

“Every version of the health care bill has contained multiple pro-abortion mandates and federal subsidies for abortion — except for the version that was fixed by adoption of the Stupak-Pitts Amendment, over Speaker Pelosi’s objections,” Johnson explained. “But President Obama and Senator Reid succeeded in keeping that fix out of the Senate bill — indeed, the Senate produced a final bill that is the most pro-abortion single piece of legislation to reach the floor of either house of Congress since Roe v. Wade.”

Which is why the US bishops are so actively engaging Congress to encourage moral reform.