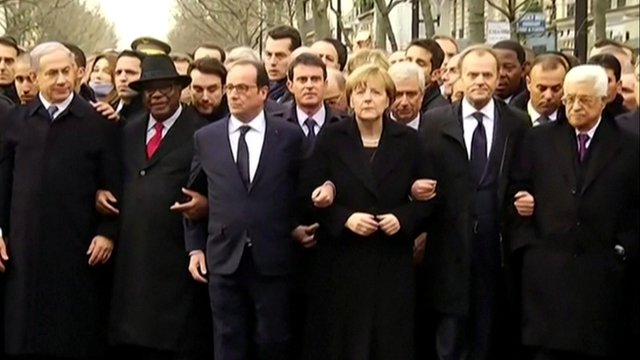 America’s president was conspicuously absent. Why? “Mr Obama is wholly out of sync with U.S. thinking and sentiment.”

So says Peggy Noonan in this Wall Street Journal column. It’s good reading for those fed up with fed-up-ness.

Here are the reasons the president of the United States, or at very least the vice president, should have gone [Sunday] to the Paris march and walked shoulder to shoulder with the leaders of the world:

To show through his presence that the American people fully understand the import of what happened in the Charlie Hebdo murders, which is that Islamist extremists took the lives of free men and women who represented American and Western political freedoms, including freedom of speech;

To show through his presence that America and the West, and whatever nations choose to proclaim adherence to their democratic values, will stand together in rejecting and resisting extremist Islamist intolerance and violence;

To demonstrate the shared understanding that the massacre may amount to a tipping point, whereby those who protect and put forward Western political values will insist upon them in their sphere and ask their Muslim fellow citizens to walk side by side with them in shared public commitment;

To formally acknowledge the deep sympathy we feel that France, our oldest ally, suffered in the Charlie Hebdo murders a psychic shock akin to what America felt and suffered on 9/11/01. The day after our tragedy, the great French newspaper Le Monde ran an unforgettable cover with an editorial of affection and love titled Nous sommes tous Américains: “We are all Americans.”

I’ll never forget that. I can’t say we are all Charlie Hebdo, as the trending pop slogan declares. But I can say we are all citizens of the world, virtually the same language Barack Obama used in his July 2008 Berlin address just four months before his first presidential election. Back when he wanted to identify with the masses, and embrace adoring crowds. Neither is happening now. But what is happening of import, is happening without his participation, acknowledgement or obvious concern.

Peggy Noonan concludes her piece with the historical reference to Gen. Lafayette, “our first foreign friend” who fought alongside Gen. Washington in 1776. Noting that the reference was starting to appear in social networks, she said that

…it would be good to send our friends in France, again through social media, the sentence, “Lafayette we are here, still, and with you, even if our leaders were not.” [Signed:] “The American people.”