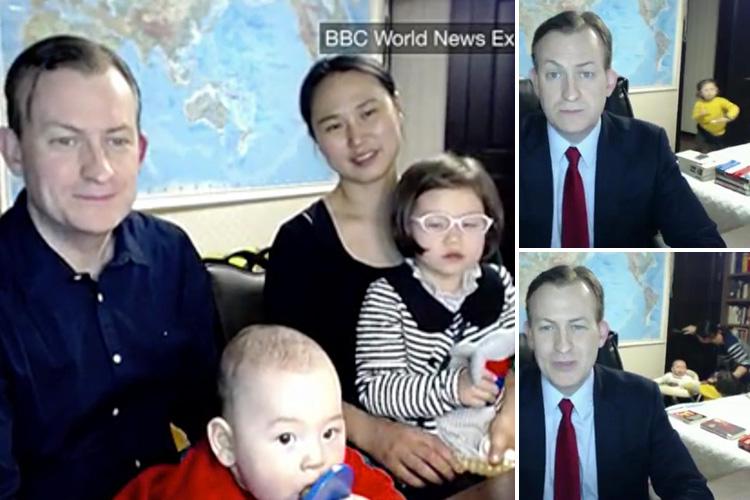 Family prevails. And the video of it goes viral.
Sorry if you’ve seen this dozens and dozens of times. I posted it on my personal Facebook page as soon as I saw it last week, and stopped laughing long enough to “share” and add a personal note. Since then, so many media folks with a big following in social media have shared it as well, adding their personal comments to the tweet or post or other commentary, it’s grown into a phenomenon of the moment. And one with a message.

Mollie Hemingway does the best job of capturing what happened here.

This morning the BBC interviewed Dr. Robert Kelly, an associate professor of international relations in the Department of Political Science and Diplomacy at Pusan National University in South Korea. The topic of the interview — the impeachment of Korean President Park Geun-hye — was interesting. But Kelly’s children stole the show.

It has to be watched first, then read about. Hemingway’s Federalist piece puts our universally shared reaction to this spontaneous moment in context.

She lists the 8 (updated from 7 initial) best things about the children taking all the attention from Dad during his BBC interview. There was a ‘marching toddler’ and a ‘rolling baby’, and viewers had their favorites. One tweeted

Enter every room like the kid who interrupts the BBC Skype interview.

Y’all, the baby rolling in got me crying.

I actually laughed to that point of tears. Hearty, knowing, laughter.

I legit can’t stop watching this.

Then there’s the mom who realizes what’s happening in real time, and she comes tearing around the doorway into the room, ducking to avoid the camera (or so she thinks) and grab the kids, and we can’t help but laugh with them, to the point of tears.

Mollie Hemingway and her husband frequently do media interviews and manage their family life at the same time.

By the time the mom rushes into the room, realizing the kids have gone rogue during their dad’s very important interview, the comedic value is unquestioned. She goes low — and speaking as someone who does these types of interviews and who is married to someone who does Skype interviews, I can assure you this is a natural instinct.

…having been interrupted by the chaos of life while on air, I know how stressful it is for children to enter the scene. I have never handled it as well as this guy, who keeps his composure as he tries to signal to his toddler to get out of the room. But he’s also totally laughing it off.

Which is refreshing, when we see the utter humanity of happy family chaos break in on structured, managed and reasonably controlled circumstances.

Television is so well-produced that we rarely see real life interrupt our broadcasts. When the toddler walks in, the interviewer is forced to acknowledge this, breaking down the wall we normally preserve between work and home life.

Or at least the perception of it. When one lives in their office and works in their home, this can happen. For all of us who do that, this provided huge comic relief.

The Wall Street Journal was among the major world media whose follow up coverage outdid the initial intended interview.

The buzz has even overshadowed the major news Mr. Kelly was on air to discuss: the impeachment of South Korea’s president.

“It’s a comedy of errors,” Mr. Kelly said in an interview with The Wall Street Journal.

He also said he and his wife “immediately feared the worst, assuming that he wouldn’t be contacted again to appear on TV.” This is easy to picture:

“We said to each other, ‘Wow, what just happened?’ ” Mr. Kelly, said, adding the blame was entirely on him for not locking the door….

“I made this minor mistake that turned my family into YouTube stars. It’s pretty ridiculous,” he said.

He immediately wrote to the BBC to apologize, but within 15 minutes the broadcaster asked if it could put a clip of the interview on the internet. The couple initially declined, feeling uncomfortable that people might laugh at their children. But they were eventually persuaded that the video would show they were just a regular family.

Within a couple of hours, it became clear to them that the video would disrupt their lives…

Yes, that’s because it “had been viewed over 84 million times on the BBC Facebook page as of Tuesday morning U.S. time. It has been covered by media from Uruguay to Nigeria to Australia, and dissected in thousands of news articles and social media posts around the world. Many have expressed warm feelings toward the family…”

Proving that this brief sequence of events in the life of a family doing what they do in their routine at home, spontaneous chaos and all, brought us together in ways punditry and social science brilliance never could.

Watch both videos, the one on The Federalist site, and aftermath family discussion with the Wall Street Journal here. They’re so human, so endearing.

Mr. Kelly describes his reaction (to the initial disruption) as a mixture of surprise, embarrassment and amusement but also love and affection. The couple says they weren’t mad and didn’t scold the children. “I mean it was terribly cute,” Mr. Kelly said. “I saw the video like everybody else. My wife did a great job cleaning up a really unanticipated situation as best she possibly could… It was funny. If you watch the tape I was sort of struggling to keep my own laughs down. They’re little kids and that’s how things are.”

The otherwise cool, calm, collected Dad laughs and says “This is my life, man!”

This is a life more of us can relate to, exactly, as we ‘do media’ in setting where family, or pets, or neighbors pets or lawn mowers or snowblowers just outside the door or window can cause significant distraction or interruption.

But that’s what made this more than another foreign affairs interview on a global network covering so many stories of the moment, we can’t keep up so most people don’t even try. This interview was supposed to be about the impeachment of South Korea’s president. But wound up in the Wall Street Journal as this: “When the Children Crash Dad’s BBC Interview: The Family Speaks”.

And that’s what the world needs to hear. And see.